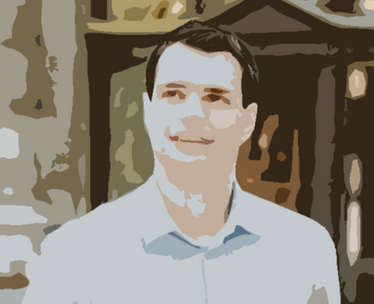 Jack Page is the author of Call to Power. The man behind the pseudonym has earned some of the greatest accolades of the writing world, yet Jack’s identity remains a mystery. Why the enigma? Because his stories are explosive. Jack Page has spent years managing the world’s top finance and banking companies. In his novel, he asks whether there is space for morale in the boardroom and how digitalization will disrupt the economy. But his fast-paced corporate thrillers probe one question more than any other: What difference can one determined individual make in big business?

How does a banker end up writing fiction?

Actually I have been writing far longer than I have been analyzing spreadsheets. I did not only study business, but also journalism and literature. Upon graduation I worked as a business reporter, honing my writing skills and the instinct for a good story. The latter distinguishes my writing up to this day. After some time, I left journalism because I wanted to make news rather than to chronicle them. So I worked my way up the coprorate ladder in strategy consulting and finance, all the way to executive positions in one of the world's biggest banks. Yet my love for writing never left me. I wrote a lot of non-fiction, but that didn't sate my appetite. To send a strong message there is no tool as powerful as the novel. That is how Call to Power came into being.

Is the pseudonym really necessary?

The pen name allows me to push limits I could not under my real name. When you are writing about a domain you spend your professional life in, it is impossible to separate your experiences from your hypothetical what-if thoughts. And this is what good thrillers live from; you sit in a boring meeting and ask yourself, how it would go if person A had the character traits of person B, or the same motives as person C. What would happen if two adversaries were put in the same team or one slept with the other's wife? The more complex your web of thoughts becomes, the better the plot. Very little of what is in a (good) novel is mere mirroring of reality, yet many people around you overestimate their importance, seeing themselves in some of the characters. If I wrote under my real name, a lot more caution would be necessary. So yes, the pseudonym makes my fiction a whole lot better.

You have written under your real name in the past and have won a number of prestigious awards, both in the US and the UK. Wouldn't it be smarter to build on this platform, instead of using a pen name?

Again this is a matter of an author's freedom. Unlike my former work, Call to Power touches on many sensible topics such as scandals, boardroom intrigues, offshoring of manufacturing jobs, tax dodging, and religion. I do not expect to win awards with this novel precisely because I deal with so many hot-button issues that nobody else wants to. And as far as my readers go, I don't think they will be impressed by the awards. Instead, I will be giving away for free a short story introducing the main character of Call to Power. So they can judge themselves if they are willing to invest in the novel.

How long did it take to write Call to Power?

In hours: as much as a bachelor's degree. In years: three. My first draft was about 220.000 words, more than twice the length of an average novel. I spent almost one year revising, fine-tuning, and cutting the fluff, eventually bringing it down to 120.000 very powerful words. The major challenge was that I had created so many characters that gripped me, I had the feeling I was doing them injustice by cutting out their episodes. Yet knowing that readers' most valuable gift is not the money they pay for the novel, but their time, I went through the painful deletions. I recently looked at my first draft - the editing was the right thing to do.

Which novels inspired you to pick up writing?

I was always drawn to high-quality commercial fiction writers that are very plot driven, writers such as John Grisham, Joseph Finder, David Lender, or Michael Ridpath. Moreover, I am a huge House of Cards fan (both the series and the novels by Michael Dobbs); some of my beta-readers have even called Call to Power a "corporate House of Cards," which is probably where the influence shows.  For fans of more canonical literature I would suggest "The Apprenticeship of Duddy Kravitz" by Mordecai Richler. It is amazing how Richler manages to tell the story in a way we end up cheering for a character who has done such atrocious things.

People spend their entire day in the office. Why should they read about it in bed as well?

I chose the business setting for two reasons: 1) I knew it 2) I was fed up with the overused character types such as detectives and authors. There are little main protagonists who are bankers or managers at a manufacturing plant - this brings a refreshing angle. And I sincerely hope that my readers' are not part of daily conspiracies and scandals. If they are, I would suggest changing the job, rather than the novel on the nightstand.

Books about digitalization and its impact on the economy fill entire libraries. You tackle the issue as well. How is your take different?

Some of my beta-readers told me that a novel about digitalization must be set in SIlicon Valley, the driving engine behind the phenomenon that is disrupting our lives like nothing else since the industrial revolution. But I went the other route. Decision-makers on California's coast have no inner conflicts as to what the future should look like, but go to the heartland and conflicts arise. I chose to set the story in the Rust Belt because nowhere else can you see the impact digitalization has on people's lives as well. Add to this suspense and drama, a fast and twisting plot, and captivating characters and you get a powder keg that will keep readers up all night, pondering what they would do in a position of power.